Here’s my Saturday collage from Memphis and Sunday’s collage based on the Mosaic Church in Little Rock logo. These are pretty straightforward collages designed mostly in the car. 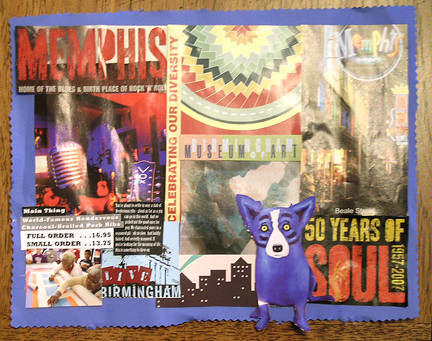 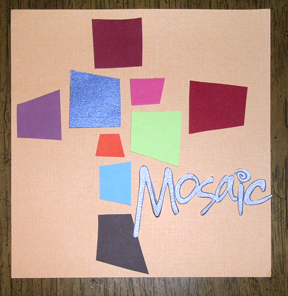 We’re taking a break until Saturday while we stay parked in Dallas.

[update] Last night, we had a sushi fest with our hosts — yes, homemade sushi rolled by DJ and Rachelle. One of those side benefits of hosting strangers/friends at your home, as long as those strangers know how to roll sushi. 🙂 Finger food and food art all rolled in one! Delicious! See all 4 sushi eating photos. 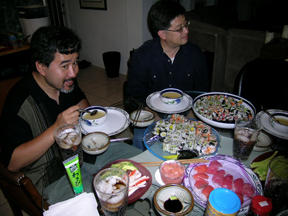 Yesterday we were hanging out at Urban Grounds in Avondale Estates, GA and since I didn’t have a pair of scissors, I just made do. Part of the adventure of being a collage artist is keeping your eyes wide open and gathering what’s around. There’s nothing like a coffee shop to discover interesting finds and we had visited the Georgia Aquarium and Coke Museum gift shop earlier in the day. Having no scissors, I tore apart all my items, dug around our X-terra for a stray glue stick and used my fingernail clipper as art tool. I tore out the cardboard strip from the bottom of my Coke tote bag and threaded the handle through the collage. It was very satisfying to make something completely out of found objects. However, if I hadn’t found a glue stick in the car, any ideas of what to use as a binding agent? Any creative ideas of what to use from a coffee shop as glue? (the thought occurred to me that I could order a dozen sticky buns and scrape off the frosting and use it as glue, but that was going to be too much). Here’s the end result: 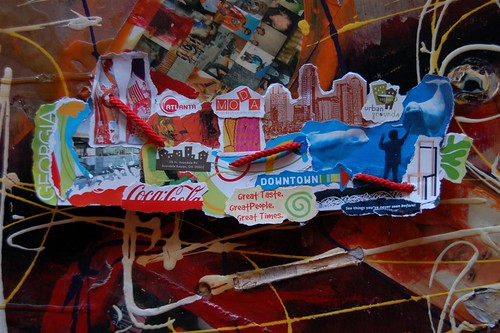 P.S. The Color of the Day (friday) was Coca-Cola Red

I did get caught up on my collage-a-day this past thursday but have been unable to post til’ now. This trip is all about the food. We’re tryingÂ to avoidÂ chains if we can help it and seek out as much local flavor as possible. Wednesday’s colors of the day were “Egg-Yolk Yellow” and “Biscuit Beige” and I made this collage of our yummy farm-fresh breakfast at the Meaders. Besides the eggs made-to-order we ate biscuits made from scratch with honey and fresh blackberry jam, two kinds of sausage, garden tomatoes, orange juice and coffee. I highly enourage the Meaders to open their Bed and Breakfast soon! 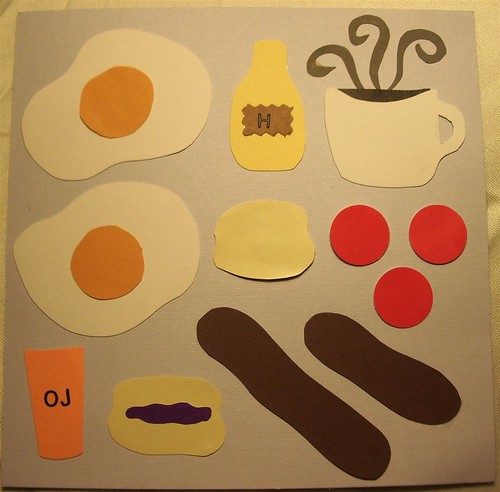 Thursday’s color of the day was BBQ Brown. We ate Southern food for lunch and dinner. I had a hankering for North Carolina Pulled Pork since we Woo’s have a preference for vinegar. Dj already wrote about our lunch at Hillbilly’s which fulfilled all my desires for pulled pork and more! For dinner our gracious hosts took us to Watershed in downtown Decatur where I had the plate of hot veggies: buttery lima beans, black-eyed peas, fried okra, collard greens, and a couple ofÂ cooked tomatoes. For dessert we walked in the balmy summer air to the Little Shop of Stories and ordered the most amazing ice cream I’ve had on this trip. Dj had tiramisu and I had Key Lime Piescream. 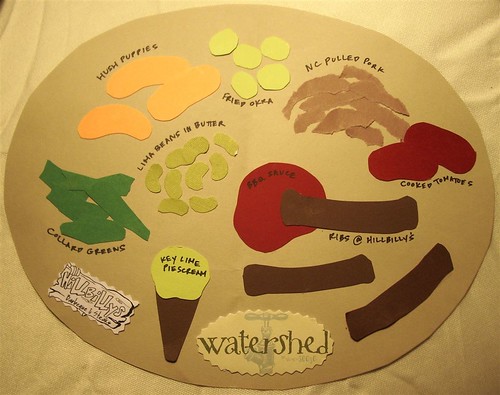 [from Rachelle – reflections on June 19th]

Driving through Virginia in the summer is very lush. The gradations of green are broken up by the occasional billboard which I find optically stimulating. (I tend to prefer billboards to break up the visual monotony, thatâ€™s why I find driving through Maryland eye-numbing)

When we approached Virginia Tech I saw memorial magnets on bumpers in the classic orange and maroon emblazoned in our collective memories during the April tragedy. Most of the evidence of that day has been taken down on the campus. Iâ€™m struck with how global the tragedy was but when we walked around campus and Norris Hall things seemed much smaller and much more localized. The famous VT limestones seemed weighty and silent.

Collage #2 is a bit more abstract. Iâ€™m tired of the over-literalism of VT images and this seemed appropriate to my mood of the day. 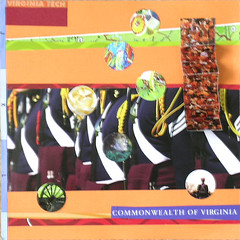 Breakfast: Sheetz in Winchester. We both had the â€œSeriously Bold Coffeeâ€ drinks custom-ordered on a touch pad screen. Nifty! P.S. Unleaded Gas was $2.75/gallon

Dinner: Jasonâ€™s Deli in Raleigh. Graphics, cleanliness and menu presentation was outstanding but we were utterly disappointed with the price and quality. Jeremiahâ€™s kidâ€™s meal was a microwaved pizza with 3 pepperonis. Jeremiah gives it a â€œ4â€ which is the lowest score so far on this trip. Rachelle took a trip to the salad bar (passable) and ordered a Fiesta baked potato. I used to eat baked potatoes at Jasonâ€™s Deli in Dallas all the time. In fact, I was eating one at lunch time when I first heard about the Oklahoma City bombing so itâ€™s a distinctive memory. I was looking forward to this potato! However, it was shockingly gross, like a pseudo-cheesesteak smashed under a tire. The potato itself was huge but swimming in a pool of butter and orange liquid that calls itself â€œcheese.â€ There was supposed to be chicken in the mix but I think I only counted 5 chunks bobbing up and down somewhere. I couldnâ€™t bear to eat more than a couple bites but passed it down to our â€œnever-say-noâ€ friends (i.e. Joe Chen). Dj ordered a sandwich/potato chip platter. Add drinks and it all cost $30. Fortunately, we weren’t there for the food, but for our awesome Raleigh friends whom we met when we lived there from 1995-1997.

We’re staying in Raleigh for an extra night, courtesy of the Meaders. They cooked us an authentic country breakfast this morning, with real biscuits that don’t fall apart and butter baked in (no extra butter needed), sausage, fresh eggs with brighter rounder yellower yolks, and grilled sausage. 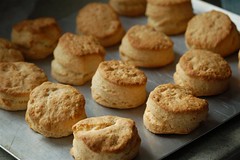 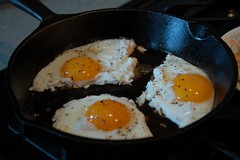 Absolutely delicious! Jeremiah rated the breakfast a “15” (on a scale of 10)! This video gives you a glimpse of the cooking action.

Steve Knight got a screen-capture of our drive to Raleigh yesterday afternoon:

I tried recording it using the Ustream.tv server, but my mobile Internet wasn’t recording-friendly. Right now, we are at a local Starbucks right across the street from Meredith Village Apartments where we lived from 1995-1997, right after a stop by Rex Hospital where Jeremiah was born. We’re broadcasting live right now a beginning to end of Rachelle making the Collage of the Day.

Rachelle: We took Fatherâ€™s Day off to rest and relax. Today I am mentally and emotionally starting the move, but I need a little sugar to get in the mood :). Weâ€™re sitting at the new Winchester Starbucks, munching on the new Key Lime cake and sipping an Orange CrÃ¨me frapp that matches Jeremiahâ€™s outfit. The whipped cream is perfectly swirled with orange drizzle. Jeremiah has his big island orange tie-dye shirt and Dj has his orange sushi lovers shirt and orange crocs. I still think he looks like he has duck feet with them on (I warned him about the color).

Today I will start my cross-country collage. I’ll be making a collage every day during our cross country move road trip! 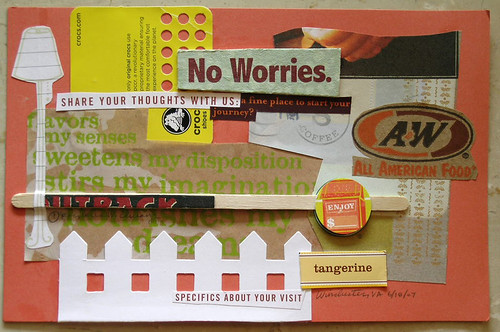 COLOR OF THE DAY: Tangerine orange (Dj and Jeremiah are in orange today and tangerine is the color of my Orange CrÃ¨me frap)

To share this experience with you, this video online gives you a behind-the-scene the-making-of this limited edition “collage of the day” series —